The website is a work which consists of a number of folders. Each folder contains individual pages which are in themselves discrete works which are video installations or video performances which occur in locations chosen for specific video animations to be played back or played on equipment chosen for that particular animation+location. The format for each of the individual pages consists of two rectangles which link to videos. The first rectangle links to a documentation of the work in its site specific location. The second rectangle links to the video animation used for the individual work. This video may also include the source video for the animation and documentation of the video playback 'system'. Between the two rectangles is a highlighted word which links to another webpage which has additional information about the location, the work, the equipment or whatever else may have been in the artist's mind at some time or other. 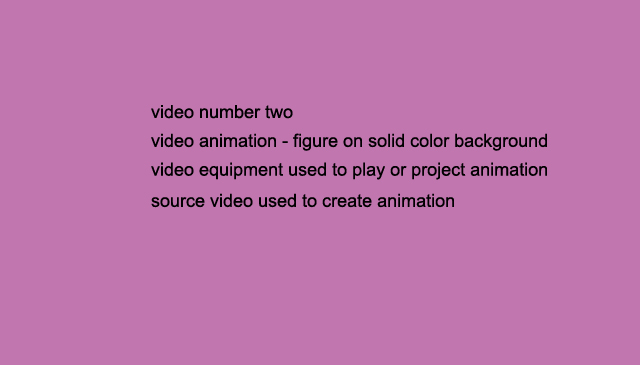 A digital animation is playing on an android tablet screen hanging from a cypress tree over a swamp in Louisiana. A digital animation is playing on video equipment at a location chosen for that purpose. A digital animation consists of a figure performing an activity, often mundane and repetitive, against a solid color background. Some of these figures were sampled from movies, television shows or commercials. Most figures are from original video recordings of people running, walking, working, playing golf, bicycle riding. These source videos are broken down into individual frames in a video editing program and then some of those frames are reworked in Photoshop, dropping out the background and replacing it with a solid color. This is a standard video editing technique called rotoscoping. These altered frames are reintroduced into the editing program and compiled to become the animation. These figures become the actors in the performances which are created for their new locations.


The recent manufacture of battery operated digital video and multimedia players allows for a new mobility. The video equipment often has an internal memory or requires only a micro SD card to store the animation. I have been able to use .mp3 players, eReaders, android tablets, smartphones, micro projectors and even some older lcd monitors operated with the aid of AA battery packs as power units to play .mp4 video animations outdoors as well as indoors in locations where there are no electrical outlets. Some of the video display devices are combined with objects or placed inside of containers which create mini video sculptures. The multimedia players are often inexpensive and end up requiring time and practice to operate thus lending themselves to short exhibitions or performances rather than the continuous playback required in a gallery or museum setting. These mini-exhibitions are then video documented in their performance location and become the basis for the webpage associated with that work. The individual works belong to clusters of video performances organized around the execution of a trip or other formulated concept. The combination of all these works creates a universe of discourse in which individual elements mentally reverberate as they interact with each other.

The website www.rrapp.net presents this body of work as an incoherent whole created specifically for the internet. Each individual work on www.rrapp.net involves the video documentation of the original performance installation in situ. Each individual performance is grouped in a series either related by concept or location. Each video exhibition has one webpage for the video 'documentation' and links to a second web page which many contain additional jpegs, videos or text. The text may give information about the animated video and the means of presenting the video, projection, video monitor, objects used, etc. Sometimes anecdotal information is included. Thoughts associated with. Previous histories of. Facsimiles of travelogues.

"from here to there and back again". Driving across the United States, I choose ten locations for the exhibitions and matched ten videos and equipment with the destinations. The exact location, the specific spot for the performance, was not determined until the arrival in the area. Finding the perfect stage for the video performance could not be decided until driving around to multiple potential sites. It was necessary to remain flexible before selecting the exact destination. The first location chosen was a beach at Riis Park in Queens. The work chosen for the exhibition at Riis Beach was similar to works which I had exhibited in galleries and art fairs. A lcd monitor is encased in a silicon rubber jello mold of a fish. The lcd monitor needed an independent battery pack to power it on and a separate digital media player to play the video. The media player also required it's own battery energy source. The group of equipment, wires, silicone rubber covered batteries, media player, jello mold fish and monitor were arranged on the beach to await the coming of the waves which eventually washed up and over the fish. Most of the locations on the itinerary such as the Rio Grand in Texas or Whitesands in New Mexico were new to me. The sun scorched grass hills surrounding Petaluma were chosen as the turn around point. An undulating brown gold meets the cloudless sky blue. The dessicated beauty of the rainless summer. Continuing east now I visited the Badlands in South Dakota which I had seen when I was 12. A re membering. "from here to there and back again" was carried out between the end of May and beginning of July in 2013. 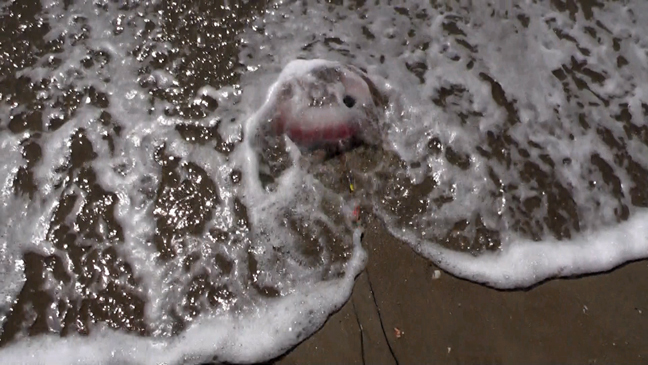 The group of work entitled "SA" was executed between September 1 and October 5, 2015. There are 11 sites in this group. On the hills above Cuzco, Peru a massive stone structure called Sacsayhuaman sprawls. I had been to Cuzco, Peru before and had visited Machu Picchu, but somehow had missed Sacsayhuaman. This became a necessary destination, a minor obsession which had to be rectified. Sacsayhuaman became the location around which a second series evolved. I began to add other sites to the list partially based on similarities to locations visited on the first trip. I decided to look for a ficus tree to create the setting for a video exhibition, so the Costa Rican rain forest on the Corcovado peninsula became a parallel to the Cyprus tree swamp of Louisiana. In this new 'tree' location, I decided to play a sampled clip from another bette davis movie. Not all of the locations were determined ahead of time in such a fashion. Panama City was an excellent analog to Las Vegas. It is a city which seems to have grown out of the tropical soils in a very exuberant form while Las Vegas sprung out of the sand to be a city of one one million plus people. Both have gambling. I had planned to visit several locations in Brazil but found out that I needed a visa which I would have had to obtain in the United States, so Brazil was out and Iquique, Chile and Cartagena, Columbia were substituted. 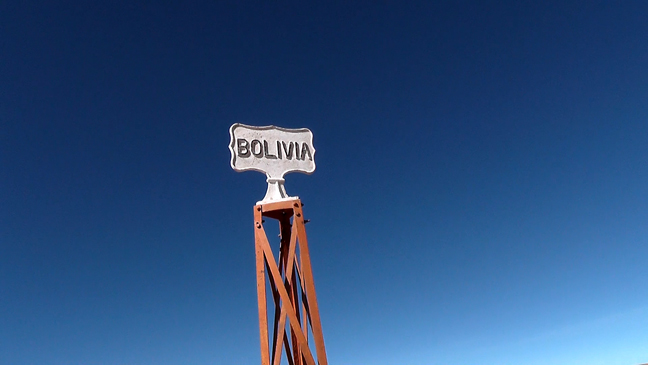 "monuments Mausoleums Asylums" investigates locations which refer to the dead and dying. The physical remains memorialised. The physical remains memory. The performance "an abbreviated history" utilizes an animation consisting of 5 sampled short selections from the military history channel programming. The selections include one from the Korean War, one from the VietNam war, one from the Grenada skirmish, one from Gulf War I and one from the Afghanistan non ending engagement. A World War II gun emplacement sits isolated, abandoned in the brush within the sound of the waves crashing on the beach. A dirt road passes by the concrete structure. Several mixed sand and dirt trails wind down to the beach, passing through dense shrubbery before giving way to vegetated dunes and then sand. Location: Breezy Point (Queens), Fort Tilden National Historic District 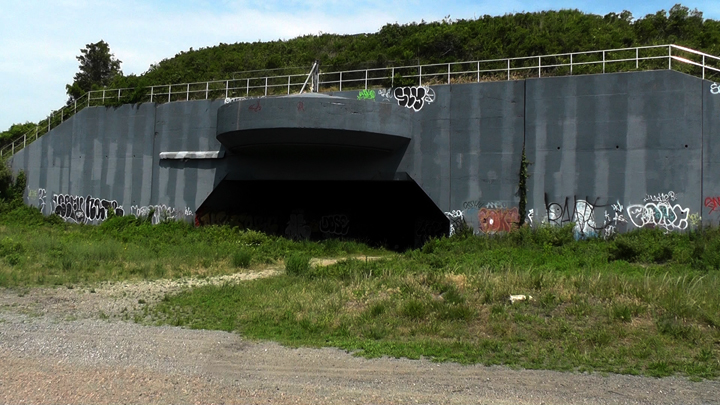 I projected a video on an internal wall of the World War II gun emplacement. The video "an abbreviated history of United States military engagements after World War II" chronicles the major US wars since the gun emplacement was in active duty. The large concrete surfaces have been covered with spray painted graffiti. From spray cans. The projected video on the smooth gray surface becomes a form of electronic graffiti whose mark disappears when turned off. Marking. Tagging. Trace. No trace. The act of playing a video in a location is similar to tagging it. The flickering light marks the spot. There is no residue. Nothing marks the remains of the performance. The walls remain the same. The artist video documents the activity. 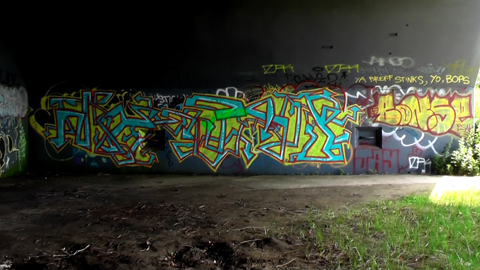 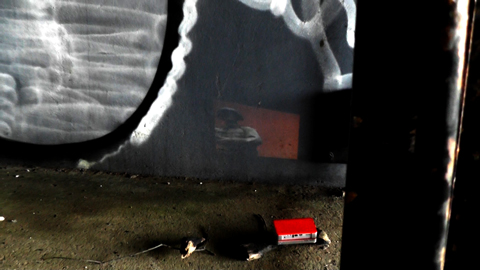 "sand Traps and other hazards" includes work from the United States and South America. Golf courses in the United Sates are beautifully manicured grass lawns called 'fairways' with even more perfect putting surfaces called 'greens'. Hazards such as sand traps, ponds, tree groves and sedge grasses are added to challenge the golfers. In this video grouping there are a series of natural obstacles which had to be overcome. Whitesands, New Mexico is next to a missile test range. "Be the premier open air test range, for U.S. and Allied customers, delivering superior testing, evaluation, research, exercises, training, innovative products, and venues through a highly skilled and adaptive workforce." The white sand is composed of gypsum and forms amazing dunes. Iquique, Chile is a city on the Pacific Ocean in northern Chile which is carved out of the sand mountains of the Atacames desert. The Imperial Sand Dunes stretch from northern Mexico across the border into southern California. They have become a playground for dirt bikers, ATV enthusiasts and sand surfers. 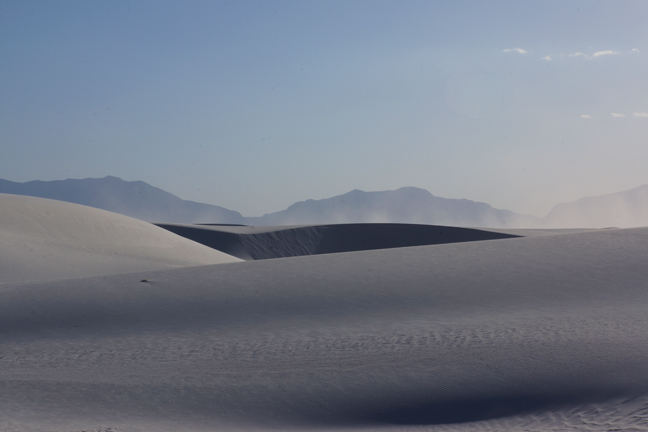 "sketches" is an open ended series of work. The works in this grouping were thought up individually often involving locations in Brooklyn. "man surf board paddling" on the Gowanus Canal uses the canal as the landscape for the performance. This canal has been one of the most polluted waterways in the US. It is now bordered by enormous new condominium buildings flanking a canal which has not yet been cleaned of industrial waste deposited over decades. The video character, the 'paddler', was videotaped off a beach in Montauk, a summer playground for recreation in cleaner ocean waters. A surf board paddler wearing a wetsuit has been spied on the Gowanus in the past year. The water is too polluted to swim in. The performance "chorusLineAtTDbank" uses the banks digital signage as the location for a post-production superimposition of an animation of high school students performing a jazz skit on stage at La Guardia High School in Manhattan. 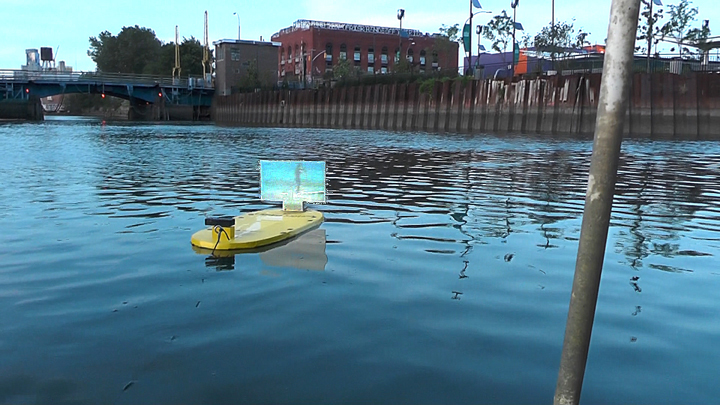